Sometimes I need to plan better, or not to let myself get distracted from my original plans. On Monday I got home from work at a sensible time planning to make Creamy Potato Gratin with Herbs from the dinner party section of Vegetarian Classics; somehow the evening sped by and I ended up opting for a quicker to prepare option for supper. Last night I got home from work at 10:30pm and decided that, since I’d bought the cream and cheese on Monday, I ought to make my gratin despite the time.

This wasn’t a difficult dish to make but I underestimated the preparation time; I think it took as long to chop and grate ingredients as to actually bake the gratin. If I’d wanted to speed up the process I could have used the food processor to cut the potatoes into matchsticks and to grate the cheese but I tend to avoid using noisy gadgets late at night.

I used a goats’ gouda in place of the gruyère the recipe called for, very flavoursome but not too goaty for the Railway Modeller. My herbs in this instance were a simple mix of parsley and thyme, I had those in the fridge and didn’t fancy going out in the dark and wet to cut anything else from the garden, and I was fairly generous with the black pepper and nutmeg.

We didn’t eat until just after midnight but it was worth the wait. Both our plates were cleared too well for the cats’ liking, I had a second helping I probably didn’t need, and neither of is is objecting to the fact that we’ll be eating gratin again for supper tonight. Although the recipe suggested a wider selection of herbs we both felt the flavour was just right as I’d made it. Some of the potato in the centre was very slightly firmer than would have been perfect; I think cooking it in a shallower dish with a larger base area than the casserole dish I used would avoid that next time.

I’d better not make this too often though, with all that cheese and cream it’s a slightly wicked supper!

5 out of 5 for clear instructions and ease of cooking 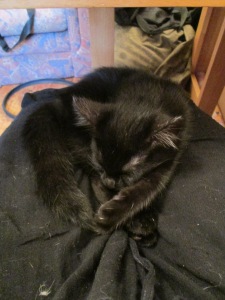 He found a box… 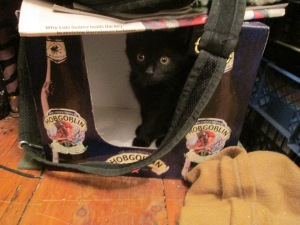 He found another box….

and then he found the bag of sleeping bags

Now he thinks he rules the roost!

Welcome to the world of cats!

wonders of bread machine: baking bread and beyond

The Sweaty Knitter, Weaver and Devotee of Other Fiber Arts

a knitting blog with occasional bites of dark chocolate

The latest news on WordPress.com and the WordPress community.